Sometimes, but rarely, it comes up in conversation with someone that I was a Naval officer at one point in my life.  Usually, it’s at some industry event–especially at the defense industry events, where it’s hard not for it to come up in conversation.  But the nature of how people react to that information has changed so much over the past 20 years that it now sometimes makes me uncomfortable.  That’s because even though I at one point served in a combat zone, and have a Navy Expeditionary Medal buried somewhere in a box to prove it, I never really thought of myself as a “veteran”–that was a label that belonged to my grandfather. 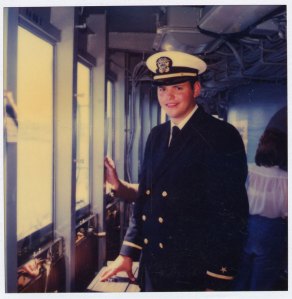 My grandfather served in World War II, fighting in Europe from D-Day to the Battle of the Bulge. He was battlefield commissioned, rose to 1st Lieutenant, and received a medical retirement from the Army after the war. And despite the memorabilia he kept on shelves, he never really talked about it that much.

I, on the other hand, served during other sorts of conflict.  I was aboard a battleship escorting Kuwaiti tankers during Operation Earnest Will, and then was in Panama in the days leading up to the short conflict with Noriega.  I never fired a weapon in anger, and the closest I ever got to personal danger were those hours spent with a gas mask on as we traversed the Straits of Hormuz waiting for an Iranian missile attack or for a mine to explode.

So, I didn’t view my military record as being anything worth noting.  At the time I got out of the service, the Gulf War was still over the horizon, and the military was trimming back. I hadn’t exactly been a model for success in the Navy–my most notable achievement was managing to avoid being killed by a combination of stubbornness, dumb luck and my fundamental unsuitability to military service.

And most people just treated my time in the Navy as a curiosity–until 2001.  And suddenly, being a veteran meant something different.

When people started saying, “Thank you for your service”, I felt like an impostor.  It felt like being thanked effusively for a gift that I hadn’t given, or one that I had purchased at the last minute and wrapped badly.  All I did was make a few Omani smugglers nervous and make them jettison whatever they were carrying in their dhow.

As the “thank you for your service” greeting became more and more like a political genuflect, it began to irritate me. It not only served as a reminder of how my own service seemed less than deserving of thanks, but it rang hollower, less sincere with each repetition, like an American flag lapel pin hastily added to an Italian wool suit.

At the same time, I started to have a little more perspective on what it means to be a veteran. While it may have taken years to take hold, the whole experience of serving with others in the cause of our country (be she right or wrong) fundamentally changed me as a person.

I look at the snapshot my mother took of me on the bridge of the Iowa 23 years ago, just as I was really beginning to understand what I had gotten myself into, and I don’t recognize myself. That was me before the turret explosion, and before Panama, and before a lot of other things that would transpire in the years that followed.  I want to shake Ensign Gallagher by the lapels and tell him to square himself away.

There’s a whole new crop of veterans now whose service dwarfs my own.  And again, I feel like an impostor when I’m counted among them as a veteran.  But  while I may not share their particular experiences, I at least feel like I can understand how they’ve been changed by it, in a way that only those who’ve served in the military can.  So I’ll thank them for their service, and mean it.

One thought on “Veteran's Day”